Joined Aug 18, 2020
·
42 Posts
If I'm looking at older HO Bachmann trains w/ boxes on eBay, how do I tell which box is an older Bachmann box? For instance, I see a lot of boxed loco's & train cars in a mostly white box w/ a weird font "B" within a circle. When were those Bachmann boxes produced? The reason I ask is that I want to buy a couple freight cars and maybe another loco to match my old Bachmann loco from the early 70's. So it would be useful to know what the boxes looked like in the 70's, 80's & 90's, etc. I assume the box design changed a little each decade or so? Thank you.

This is a more recent box for rolling stock and locomotives.....

And this is the newest/latest Bachmann box for rolling stock only.....

This site may take a bit to load, I had to try a couple of times.

Joined Jun 16, 2009
·
24,771 Posts
Look through here, Bachmann Information and Diagrams - Literature Page 45
A bunch of info along with old catalogs of Bachmann trains.

obcbeatle said:
Thank you for the photo's, info. & link! That was just what I needed. The old catalogs are helpful. Thank you!
Click to expand...

Glad to help a little.
There is a ton of HO info on the HO Seeker site.
Many manufacturers are listed, click on literature to get the index of all of them.
Cool looking at some of the old catalogs.
Has locomotive diagrams too. Helpful in repair jobs.
D

Most of us simply look at the car...check it's wheels, it's couplers and details.
Some may be quite old, yet be a car that you like. There is no penalty
for the age of cars...you can replace the wheels and the couplers of the
very oldest and they'll be good runners on your layout.

The 'age' of a model loco is something else. The power pickup
could be less than desirable...the motor may draw excessive
current...and few are likely to be DCC ready, tho most can
be manually wired for DCC. Care must be taken when
buying used locos. But you can find bargains at 25 and 30
dollars.

Train shows are a very desirable place to find model train cars and
locos. Most are being sold by vendors who have bought them
from the estate of a deceased owner. The prices for cars
will run from 3 or 4 dollars on up...a good car with knuckle couplers
will likiely be priced around 4.00...those with metal wheels and
detailing can run up to 10.00 or more. The vendors do
negotiate so what you pay depends on your shopping skills.

Joined Aug 18, 2020
·
42 Posts
Thanks Don, I was primarily interested in the box info. because I was hoping to buy a few rolling stock cars that I don't have that were available in the early 70's when I was gifted my Bachmann set as a kid. At the time all the rolling stock I was seeing on eBay was overwhelming my senses 😊 I was just trying to determine what was vintage and what wasn't, and trying to find out what the differences were between vintage and newer Bachmann rolling stock. It looked to me like the older Bachmann trains were better detailed than the newer trains. I sure will be glad when the pandemic is over so I can go to a model train show! It will be nice to meet up with some local train enthusiasts who can help me understand model railroading better. It still is a bit overwhelming to me since I haven't played with these trains much since I was a kid Anyway, thanks for the reply and info!

obcbeatle said:
It looked to me like the older Bachmann trains were better detailed than the newer trains.
Click to expand...

This is generally not the case. There may be a bit of degradation of paint masks and tooling across 70's-90's of some Bachmann products, but the last 15-20 years of Bachmann are notably better than what came before. There are exceptions, but the premium "Plus" and "Spectrum" locomotive lines of the 90's and early 00's are now the basic lines of today. Much of the tooling for the current basic line of rolling stock is the same or only slightly modified, but the paint is better than the past and the couplers and wheels have been upgraded as well.

As well as being better detailed and painted, the locos of today and their all-axle drives are more advanced than the single-truck pancake drives of the late 70's through mid 90's.

The predecessor site to "HO Train Resource" is here:

tycotrain.tripod.com
It's slowly crumbling and some links are dying but it's larger with alot of stuff that hasn't been transferred yet. Google searching for Bachmann and other terms a within the domain "tycotrain.tripod.com" will bring up alot of interesting information.

A few other bits of information:

-I agree that train shows are probably the best place to look for Bachmann. Older Bachmann especially is quite affordable and often fills the 1-5 buck bargain bins. Until that is feasible, an ad here, or at hoswap.io will likely net you alot of folks who can dig up stuff for you.

-The Box with the red outline and "B" (the second you show) is from sometime in the 80's through the 90's and possibly a bit into the 2000's. I've got rolling stock from the 80's and 90's in those boxes and I have one loco that I suspect may even have been from around 2001 that came in such a box.

-The yellow edged box is only 70's and early 80's as far as I've been able to see. The HO Scale resource site shows it with alot of early 80's rolling stock.

If you want 70's rolling stock, then that's the yellow outline box you want. However aside from a shade of paint, many cars were produced for a decade or more with no change other than perhaps a slightly different shade of paint. If that matters to you, then you'd best stick with boxed examples. However if it's just the same-type that you want, you should be able to easily find armloads of Bachmann cars that are -or are nealy- identical to the 70's Bachmann cars you remember.

Best of luck with your search! 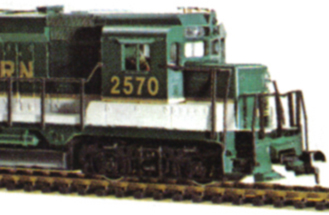 ho-scaletrains.com
It's honestly not the match of modern locos, but -I'll test to be sure- i'm pretty sure it's got a good set of tires and the drive runs smooth. I'll let it go for a good price, PM me if interested. Might have some other affordable extra Bachie stuff too if I go digging.
1 - 10 of 10 Posts
Join the discussion
Continue with Facebook
Continue with Google
or sign up with email
About this Discussion
9 Replies
5 Participants
Last post:
Eilif Sep 7, 2020
Model Train Forum
A forum community dedicated to model train owners and enthusiasts. Come join the discussion about brands, various scales, repairs, storage, displays, reviews, accessories, classifieds, and more!
Full Forum Listing
Explore Our Forums
O Scale HO Scale General Model Train Discussion S Scale For Sale or Trade (member-to-member)
Recommended Communities