Joined Jun 18, 2015
·
2,979 Posts
Remember, a couple of weeks ago. All we had to worry about was social distancing, wearing masks, and avoiding the corona.
Ahh, life was much more laid back in the good old days.

Joined Jun 16, 2009
·
23,526 Posts
Well, you have to agree what that cop did was wrong?
And the other cops that just stood by and watched?
Forget the black part, it was just plain wrong be it a black, yellow or white man.
But a lot of the punks looting and burning are just that. Punks!
Their taking advantage of the situation to loot.

Joined Jun 18, 2015
·
2,979 Posts
I absolutely agree, and they need to be called to account. The destruction for the sake of it, the burning and the looting are part of a long running societal attitude, that is also wrong. And, this little discussion will not be able to change anything. We can all agree that there are wrongs within our society with how we treat each other, and how easily tempers can flare, and how also easily things can, and do, get out of control.

Joined Sep 25, 2015
·
4,110 Posts
Don’t know if they tried it during the current morass, but a few months ago in Canada protesters did stop the trains. 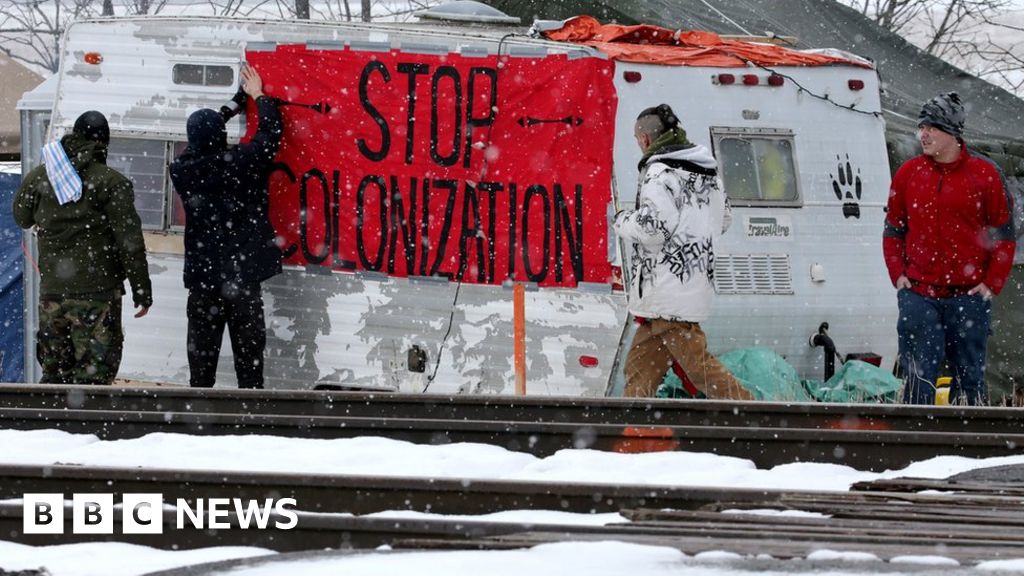 The conflict that brought Canada's rails to a halt

PM Justin Trudeau is under growing pressure to solve a conflict over a pipeline as trains sit idle.

Joined Feb 20, 2014
·
7,836 Posts
The rioters and looters are not doing their "cause" (fight against racism) any favors, that's for sure....obviously, that is not their cause, they are thugs that are taking advantage of a true cause, and turning it into something that cannot be condoned......
M

Joined Nov 5, 2017
·
364 Posts
Your title reminded me of something I wrote a couple years ago and posted on a different forum:
A Story Mildly related to B-52 Bombers
When I was in grade school computers didn’t exist, air conditioning was considered a luxury and TV’s only had 5 channels (2, 5, 7, 11 and 32 IIRC). When your parents told you to “go play” what they meant was “go outside and don’t come back ‘til dinner”. Anyway, I liked building plastic models back then and had a collection of maybe half dozen when my mom entertained some guests while I was at school. There was a preschooler with one of the guests and my mom sent the child up to “the Boy’s Room” to play. There were four boys in my family, all one grade apart and we all slept in one big bedroom with two queen-sized beds. Anyway, this child found my models and proceeded to play with them as if they were toys. Naturally they didn’t appreciate being treated roughly and ended up broken into pieces. I was pretty upset when I came home but my mom took responsibility for it and paid me for the broken kits.
I remember my friend and I managed to find all the parts of one model, a JU-88 and we glued it back together. It looked pretty bad so we took some fishing line and took turns throwing it out the second story window, crashing it into the ground and reeling it back in until it had broken apart again. We had a blast. That night I glued it back together and the next day after school we planned on smashing it again. My friend got to our house before I got back from orchestra and threw the spool of fishing line through the closed window instead of the open one and had to tell my mom he’d broken a window. Our days of crashing bombers was over.
Anyway, I’d never had as much money to spend as after mom paid me for the broken models so I went to the local hobby shop on my bike to spend it. You either walked or rode your bike everywhere in those days. Your parents didn’t worry about Chester the Molester or kidnapping and we could go maybe 5 miles in all directions from the house and, as long as you showed up for dinner your parents didn’t worry about you. Actually, as I understand it the per capita crime rate was higher in the ‘60’s but the 24 hour news cycle didn’t start until cable became big in the ‘80’s and people didn’t worry about kids like they do now.
Off to the hobby shop! This was a classic shop, with floor to ceiling shelves on all walls loaded to the gills with models, model rockets, model railroad stuff etc. (RC cars didn’t become common until I was in high school but I never got interested in them) and finished model planes hanging from the ceiling from strings. There aren’t many of those shops left, the internet put the kibosh on them. We had mail order back then but it took at least two months for your order to pass through the mail, get processed and come back. Now people get upset if things they order on the internet don’t arrive in a week. Magazines had ads in them with huge lists of things for sale, a line drawing of every 10th item and a price with an address and shipping costs in the margins. You didn’t know what you ordered really looked like until it arrived.
After perusing the models at the hobby shop I spent all my money on a 1/72nd scale B-52 model. I think it was a Monogram kit. It was HUGE. I vaguely recall riding home with one hand on the handlebars and balancing the bag over my shoulder with the other. Over the next couple weeks I did some work on the plane, but when I started looking at the painting instructions I became disheartened because I didn’t have three shades of silver and I knew I wouldn’t be able to match the smooth texture of the model on the boxtop with my brushes. And I spent all my money on the model and didn’t have any for paints. Finally I put it away. It still fit in the box because I hadn’t glued the wings onto the fuselage.
Soon after that we moved to a bigger house. This one had a big attic with the rafters running right down to the floor making the attic triangle-shaped with windows at the front and back. Dad hired a carpenter to finish it and it became the new “Boy’s Room”. We each had our own bed, but only springs and a mattress, no frame. The carpenter cut off the ceiling at about waist height to make walls and he built dressers into the walls. It was a really cool use of space. During the renovation the carpenter found a pipe bomb and bag of pot in an older wall, my dad walked them both down to the local sheriff station. A couple years later a detective showed up at our door asking for Ron, and when he saw my younger brother he realized he had the wrong guy, apparently the old owners had a neer-do-well for a son.
Anyway, there was a small crawl space in there and the only way you could get back there was by taking the drawers out of the dressers. We could crawl in there as kids but it was a tight fit and after it lost its newness we stopped crawling back there. Grown-ups wouldn’t fit. I put my B-52 model in the space back there to keep it safe. A couple years later we moved. I forgot about the B-52 and left it there. For all I know it could still be back there behind the wall in a 100 year old house.

Joined Jun 18, 2015
·
2,979 Posts
Great story. I appreciate the telling. It is very similar to how I tell of the times of my youth. And, my youth was very much the same as yours, right down to the finishing of the attic. It would have been nice to have finished that plane. Perhaps some other kid found it, and finished it for himself.
L

Joined Sep 25, 2015
·
4,110 Posts
I keep wondering how many people the protesters are killing two or three weeks from now due to their lack of social distancing.

Joined Jun 18, 2015
·
2,979 Posts
Only time will tell. But, because there will be no contact tracing, we won't know who was responsible for killing who. I believe there will be many cases of the virus and subsequently more deaths form the virus. There will be lots of fingers pointing at many people for letting this happen. But, it comes down to personal choice. Those who choose to ignore the scientific facts, and choose to attempt to resume life as if this monster disease does not exist will suffer the consequence of their actions.
L

BobS said:
Only time will tell. But, because there will be no contact tracing, we won't know who was responsible for killing who. I believe there will be many cases of the virus and subsequently more deaths form the virus. There will be lots of fingers pointing at many people for letting this happen. But, it comes down to personal choice. Those who choose to ignore the scientific facts, and choose to attempt to resume life as if this monster disease does not exist will suffer the consequence of their actions.
Click to expand...

Unfortunately, the protesters are mostly young people. They may get it, never know it and pass it on to older folks who will die from it. Kind of ironic that people protesting a killing will cause the death of many others.

Lehigh74 said:
They may get it, never know it and pass it on to older folks who will die from it.
Click to expand...

And never even give it a moment's thought.
(from an older folk who could die from it...)

Joined Jun 18, 2015
·
2,979 Posts
I think it is safe to say, those who don't bother to wear masks, and probably believe that this is all a hoax, also won't care about spreading the virus on to others. I once believed I was bullet-proof, when I was young and stupid. It only took a year in a body cast to make me change my mind.
J

When I was a kid; I had a train lamp that sat on my bedroom desk. It was definitely a “kids lamp” and I outgrew it when i entered junior high.

At some point when I still had the lamp; I kept a journal of what I did for several weeks - just a kid’s musings - that sort of thing. Although I don’t remember doing so; I apparently rolled it up and stuck it inside the lamp intending to keep it safe from my sister’s prying eyes and forgot about it.
As with so many things from childhood, the lamp simply disappeared.

Five years ago; my mother received a phone call from a man in New York State who apparently had purchased the lamp in an antique store. He had taken it apart to rewire it and discovered my little journal from 50 years earlier. He did some detective work that eventually led to my parents in central PA and contacted them to tell them what he’d found in the lamp. He then mailed the journal to mom who forwarded it on to me.

So; take heart! Someone may find your B-52 and return it to you to complete.

Lehigh74 said:
I keep wondering how many people the protesters are killing two or three weeks from now due to their lack of social distancing.
Click to expand...

Probably less than suburbanites and their kids wandering around without masks.

At the height of Corona I went 10 miles out from my Chicago home and it was like no one had heard of Corona, masks and social distancing. Visited 2 weeks later and it was the same.